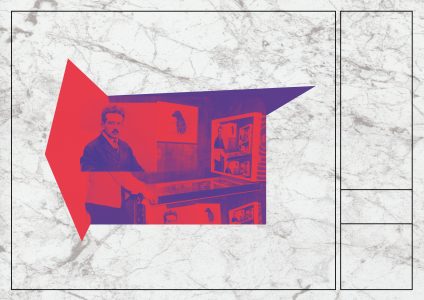 All about the Walter Benjamins is a limited edition print by Thomas Goddard created specifically as a response to the Arcades project.

The print has been created in an edition of twelve, using three processes – screen print, risograph and acetone lift. Because of this, each print is at once an edition and an original print in its own right.

The droste effect is adopted, where a picture recursively appears within itself, and is used narratively to express the continuous nature of the Arcades project, which is never finished due to Benjamin’s suicide.

As its title indicates, the print references the 1997 song by American rapper Puff Daddy. Ripping on the slang term for $100 bills, Benjamins here is flipped to reference our protagonist Walter Benjamin and its value translated via the print’s purpose as a reward for the Arcades Project backers. The plural Benjamins alludes to the print being both individual and part of an edition, equally a reference to the songs multiple versions, each with a different video.

Sitting within a structured format, as if a blue print, ordnance survey map or computer interface, it connects the print to Benjamin’s desire to learn from physically mapping a space or idea. It becomes a platform and basis from which to understand the arcades, with the overlaid marble referencing the physical form of the architecture but equally considering the built environment and city as a living organism in itself, one built on simple tracks that evolves over time.

Thanks to Rory Duckhouse